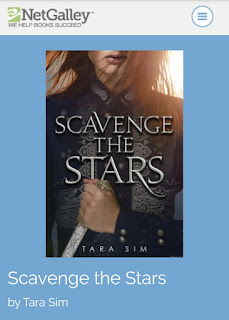 I liked the 2 main characters, Amaya and Caryo, and felt they were fleshed out pretty well. They weren't perfectly good or bad, but still tried to do the right thing, and I liked that about them most, especially Caryo.

This book is the first in a series. The story is basically driven by secrets and revenge, so I kept feeling that once the revenge is meted, and the secrets are revealed, much of the wind would be taken out of the story's driving force. This did happen, but by the end of the book, the secrets kept multiplying and the revenge became multi-layered, and the story was neatly set up for the next in the series.

The pace was moderate, and there were times the action lagged, but it kept my interest and I liked the little twists we kept getting along the way. I would have liked more world-building and more information about the political climate and surrounding countries, but based on the end of this book, I'd guess that will be covered more in the next installment.

Overall, I liked this story, and am definitely interested in reading the next book in the series! 3.5 stars.

Thanks to NetGalley and Disney Hyperion for a copy of an ARC in exchange for my honest review.
Posted by Liv2KnitNSew at 3:32 PM No comments:

BOOK REVIEW: "The Wolf and the Shadow" 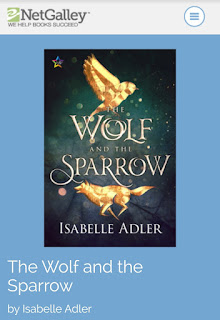 This book was an entertaining read.  I really liked this world's norm of M/M heirs being arranged in marriage, just the same as M/F.⁣
⁣
I felt that the enemies to lovers relationship of the 2 main characters took up the bulk of the story, and it was sweet, albeit a little too fast, going from mutual disdain to heart-wrenching love in a couple of weeks.⁣
⁣
In fact, the whole story felt kind of rushed, and the characters were just moving on from one death-defying situation to another; I felt a little tired on their behalf. This kept the action coming, but it also unfortunately meant that the world (more magic, please!) and the characters lacked the opportunity to build any real depth.⁣
⁣
Overall, this is the perfect book for a nice, quick read with a bit of adventure and a sweet love story; nothing too deep. ⭐⭐⭐💫 📚69/52⁣

"The Wolf and the Sparrow" releases on November 25.

Thanks to NetGalley and Nine Star Press for an ARC in exchange for my review.
⁣
Posted by Liv2KnitNSew at 10:21 PM No comments:

BOOK REVIEW: "BEHIND THE DRAGON'S VEIL" 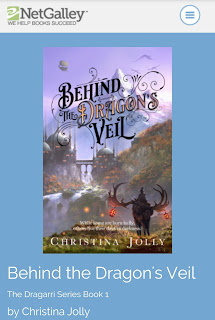 The story unfolds gradually, and is told through 3 different POV. Some characters have secrets, so their narrative is full of hints and not-fully explained thoughts, which confused me a bit, especially at the mid-way point where a lot of the action takes place and some pretty significant revelations are made. Also, the shift in POV was sometimes jarring, and I'd have to re-read a bit.

I liked the growth of our MC Ann, and how she was strong and brave, but not obnoxiously so. Finding out about the other characters and how their identities added to the plot was interesting, too.

The main conflict was resolved, but there are still loose ends to deal with for the second book. I made the mistake of reading the excerpt of the second book, and it left off with a cliffhanger!

Overall, this had some unique characters, which I'd like to learn more about, and interesting plot ideas. Although a bit confusing at times, this was an entertaining read.  3.5 stars

Thanks to NetGalley and SilverSwallowPress for the free copy in exchange for my honest review.
Posted by Liv2KnitNSew at 10:52 AM No comments: 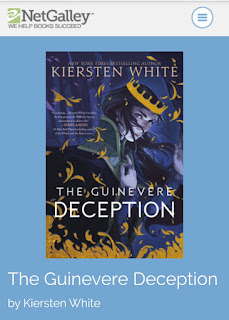 I really wanted to love this book! I've read TH White's OaFK and have memorized the movie Merlin (the older one with Sam Neil & Helena Bonam-Carter) so I love the legend of Arthur.

The first 50% of the book was painfully boring. This is a book about knights and magic and inexplicably there was no action!

So "Guinevere" is sent by Merlin to protect King Arthur from a magical attack. She arrives to Camelot in the guise of being his wife. But she doesn't know anything about the threat, she is ill-prepared for life as a queen, and her magic skills are minimal, limited to "knot magic".

The first half of the book can be summarized: "Guinevere sneaks through Camelot, tying knots, bumbling around, jumping to conclusions, complaining about the boring duties of a queen, pining for Arthur, and worrying about her limited magic abilities." That's it. Seriously.

The second half finally picks up with some action and some (predictable) revelations. Even so, a lot is left unanswered, in preparation for the following books in the series.

I feel this book is geared toward a younger audience, as the concepts are pretty simplistic, man vs magic, good vs evil. The insta-love and weak love triangle are my least fave tropes, so I found them annoying. The characters lacked any real depth, so I did not connect to them. There was really no tension in the story, and no strong compulsion to find out what happened next.

Overall, I almost DNF'd this because of the first half of the book, but the second half hints that it might be worth trying the second book.

Thanks to NetGalley, HarperCollins, and DeLaCorte Press for a free ARC in exchange for my honest review.
Posted by Liv2KnitNSew at 8:50 AM No comments: 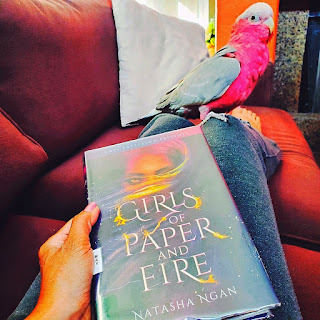 SPOILERS (AND RANT) BELOW:⁣
⁣
So I loved the writing style of this story, and I could totally envision the lovely surroundings. I really wanted to love this book, but I had issues...⁣
⁣
The MC Lei had so much potential to actually be the courageous heroine we need, but fell way short. Now Wren, on the other hand, was everything I want in a heroine: self-sacrificing, determined, and purposeful. ⁣
⁣
Lei was characterized as "brave" for "standing up to the King" when all she did was run away from him because she was scared. The other girls were scared too, but because they knew that disobedience would harm their families, they BRAVELY and selflessly suffered. Lei had no plan, she just gave in to blind fear, which was justified of course, but I wouldn't characterize her as brave and the others as not.⁣
⁣
Also, she never did analyze her situation trying to make a plan for escape, and she was actually angry when Wren revealed that she had one!!🙄 Lei was sooo reactionary. And she demanded that everyone trust her, yet she almost blew the secret at least twice because she couldn't control her emotions!⁣
⁣
And their relationship was so Insta-lovey!😣 I have no idea why they were attracted to each other, other than looks. I would have wanted more depth to the other girls too.⁣
⁣
Anyway, I wish that Wren had been the MC. Lei had me so frustrated that I really didn't connect with her at all.⁣
⁣
I don't know if coming fresh off the Nevernight Chronicles affected my perception, but it is what it is.⁣

Posted by Liv2KnitNSew at 5:15 PM No comments: 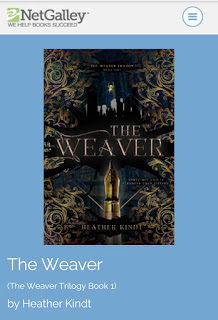 I really like the concept of an author's characters coming to life, then coming after her in order to change their story.

It started off with lots of action and an interesting relationship between the 2 main characters. But then nothing really happened except that they attended college, engaging in juvenile high school level drama clique stuff (jocks & popular girls vs smart nerds) and went to lacrosse games and dances.

At 40% of the book, the paranormal aspect becomes the focus, and the action picks up. But I felt it was rushed, and the explanations lacked depth, like it needed to be fleshed out more but the author had to hurry and end the book. I still don't really have a good sense of the recluse club members. And the ease with which everyone just accepts the paranormal phenomena , without any questions, was unbelievable.

I also found myself rereading sections that didn't make sense, like right after the MC runs terrified out of the dark woods after hearing someone chasing her, she stops to check her mail before going into her dorm and safety.  And in some action sequences the detail was minimal and I lost track of where some of the characters were spatially, so it was hard to envision the scene.

I really liked the concept, but I was pulled out of the story with too many questions while I was reading, so it didn't really suck me in and keep me there. I wish the author would have spent less time on the beginning YA drama (and sorry, but a 19-year old is not a "man"), and had focused more on that great Weaver premise.

This book was released in August, and is the first in a trilogy. ⭐⭐⭐

Thanks to NetGalley for a free copy of this book in exchange for my honest review.
Posted by Liv2KnitNSew at 3:10 PM No comments: 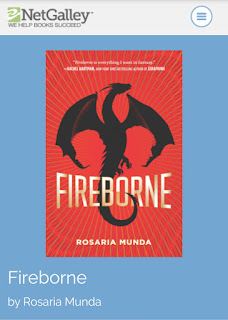 I really enjoyed this book!

The plot seems pretty straightforward at first, with a child of a murdered family seeking revenge, but it is so much more than that! The characters have situations they must really think through, as they are steeped in morality and have far-reaching consequences. I liked the growth in their complex relationships.

There are a lot of political machinations mixed in with the action of dragon riding, so although it's not non-stop action, the pace moves the story along nicely.

I ended up staying awake until past 2am reading the last 3/4 of this book because I couldn't wait to see what happened next!

Fireborne will be published on October 15.

Thanks to NetGalley for this free ARC in exchange for my honest review.
Posted by Liv2KnitNSew at 12:50 PM No comments:

Liv2KnitNSew
Hi there! I'm Jamie and I do lots (and lots!) of creative stuff! I'm pretty weird in a nerdy sort of way, so if that doesn't scare you off, please read on! I want to share my experiences in the hopes that someone somewhere will learn something new.